skip to main | skip to sidebar

Egg is an Emacs interface to git. It's a suite composed of a minor-mode and various special-buffers presenting different UIs to help the user performing many git operations.
Prerequisites
Egg doesn't provide an abstraction on top of git. Instead it assumes the user is familiar with git (and of course, emacs). Thus, egg claims it shares the same goals as git's aliases and is not another git porcelain. 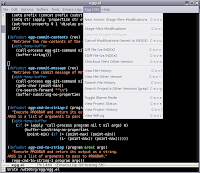 When properly activated, open a file from a git repository would show Git:branch-name or (Egg, if egg hasn't yet had a chance to query the repo-status) in the mode-line and Egg (Git) menu on the menu-bar.

The menu show many of the git operations mapped by Egg and their invocation keys. Egg tries to keeps the key bindings similar to VC: "C-x v =". The most interesting command is egg-next-action and its keys "C-x v v". Using the menu-bar, egg-next-action will execute without confirmation (because it already showed the user what the next action is in menu.) If invoked using the keyboard, egg-nex

t-action will ask the user for confirmation before executing the guessed next-action. The user then has the choice of accepting the guess or request egg to show a list of action candidates actions with the 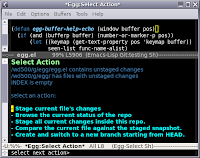 guessed candidate on the top.

It has always been the design objective of Egg: 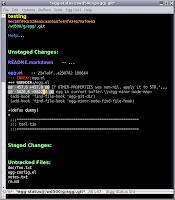 The repo section shows the name of the branch on which HEAD is attached to. Otherwise, it will says that HEAD is detached. There's also a Help section showing the bindings available in the buffer. Many blocks in the status buffer (and other egg special buffers) can be hidden. The picture on the right show the Help block was hidden and well as the delta of the file README.markdown and the first hunk of egg.el in the unstaged section. The "h" key and the middle mouse button toggle the hidden/shown state of a block. The customizable variable egg-buffer-hide-section-type-on-start can be used to control the initial (hidden/shown) state of different section types in egg's special buffers. In the status-buffer, as in other egg's special-buffers, the "n" and "p" keys let you navigate to the next and previous blocks while the "g" will refresh the display and th

e "q" will quit the window. If there was a rebase session in progress, the repo section will also show the current rebase step and more binding will be available to support rebase operations.

The two unstaged and staged sections let user do 3-way manipulation of the trio work-dir/INDEX/HEAD using the mostly "s" key and sometimes the "u" key. The "s" key behaves differently in the staged and unstaged section. In the unstaged section, it will stage the block (a file or a hunk) into which it was typed. In the staged section, it will unstage the block instead. A block of changes is ether a file-delta or a hunk. By example, in the unstaged section, typing the "s" key (stage) on the diff header of a file will add the contents of the file from the work-dir to the index. If "s" was typed into a hunk, then that hunk instead of the entire file-delta will be applied to the index. Typing "u" into the a diff-header in the unstaged section will basically restore the contents of the file back into its state in the INDEX. Typing "u" in an unstaged hunk will undo the changes shown by that hunk. Finally, typing the RET key will try to locate the line in the delta hunk back into its original file.

Another common command is the diff command. It's bound to "C-x v =" in egg's minor 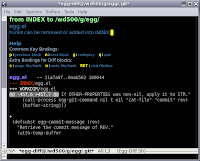 -mode use the egg's diff-buffer to show the difference between the file or repository revisions. When editing a file, "C-x v =" (egg-file-diff), by default will show the delta between the current in the work-dir and its contents in the INDEX. With a prefix (i.e. "C-u C-x v ="), the command will prompt for the old version (the new version of the file being its contents in the work-dir).

The diff-buffer is similar to a restricted version of the status buffer. The status-buffer shows two comparisons, work-dir vs INDEX and INDEX vs HEAD. The diff-buffer only show one comparison and depending on the actual entities being compared, the "s" and the "u" key will behave differently. By example, when showing the diff between two arbitrary revisions, the "s" and "u" keys will be inactive. As in the status-buffer, there's a little block of help text show the key binding on different parts of the buffer. The "n", "p", "g" and "q" In the diff-buffer, and other egg buffers, the "n" and "p" keys move the cursor from one block to the other. 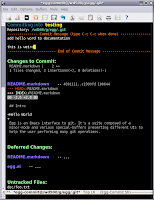 The commit buffer is launched by the keys "C-x v c" in egg-minor-mode or "c" from the status-buffer. At the top of the commit-buffer, egg informs the user the branch the commit will be add to. The commit message shall be typed between the two dashed lines. That space will expand automatically when the users type newline. Below the message input area is the 3 sections already seen in the status-buffer: unstaged, staged and untracked. They are shown in the commit-buffer to let the user a overview on what will and will not be in the new commit. They also let the user do minor last-minute INDEX manipulations if required. If launched with a prefix, i.e. "C-u C-x v c" or "C-u c", the upcoming commit operation will amend the last commit of the branch. Egg will also pre-load the last-commit's message into the input area so the user can re-edit it if required. In the input area, the "M-n" and "M-p" keys will cycle through the previously typed commit messages while the usual keys "n", "p", "s", "u", "g" and "q" are active outside the input area and they behave similarly as in the status-buffer.

One of git's best features is its design of the refs system: simple, efficient and powerful. Egg's log-buffer let the user tap into that resource. The log buffer provide bindings to let user manipulate and control git's refs (branch, tag, annotated tags),: creating and removing, pushing and fetching, merging and rebasing, attaching and detaching HEAD, etc.